David Klein was an American commercial illustrator who created artwork for many Broadway productions, Hollywood films, and the United States Army. He is best known for his iconic 1950s and 1960s TWA (Trans World Airlines) posters.

Klein's work regained popularity in the early 2000s with the help of such pop culture stalwarts as Mad Men and Orbitz featuring his work. 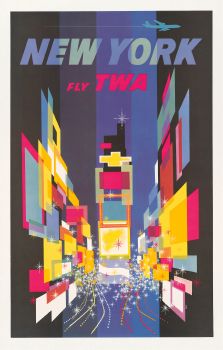