Franz von Stuck was a German painter, sculptor, and printmaker who enjoyed success as an artist while he was alive. His work often depicts stories from mythology. Although his style wasn’t as popular towards the end of his life, interest was reignited in the 1960s during the rise of Art Nouveau.

Stuck considered frames to be an integral part of his paintings and he would often design them himself. 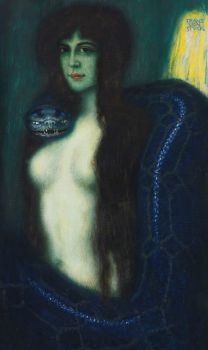